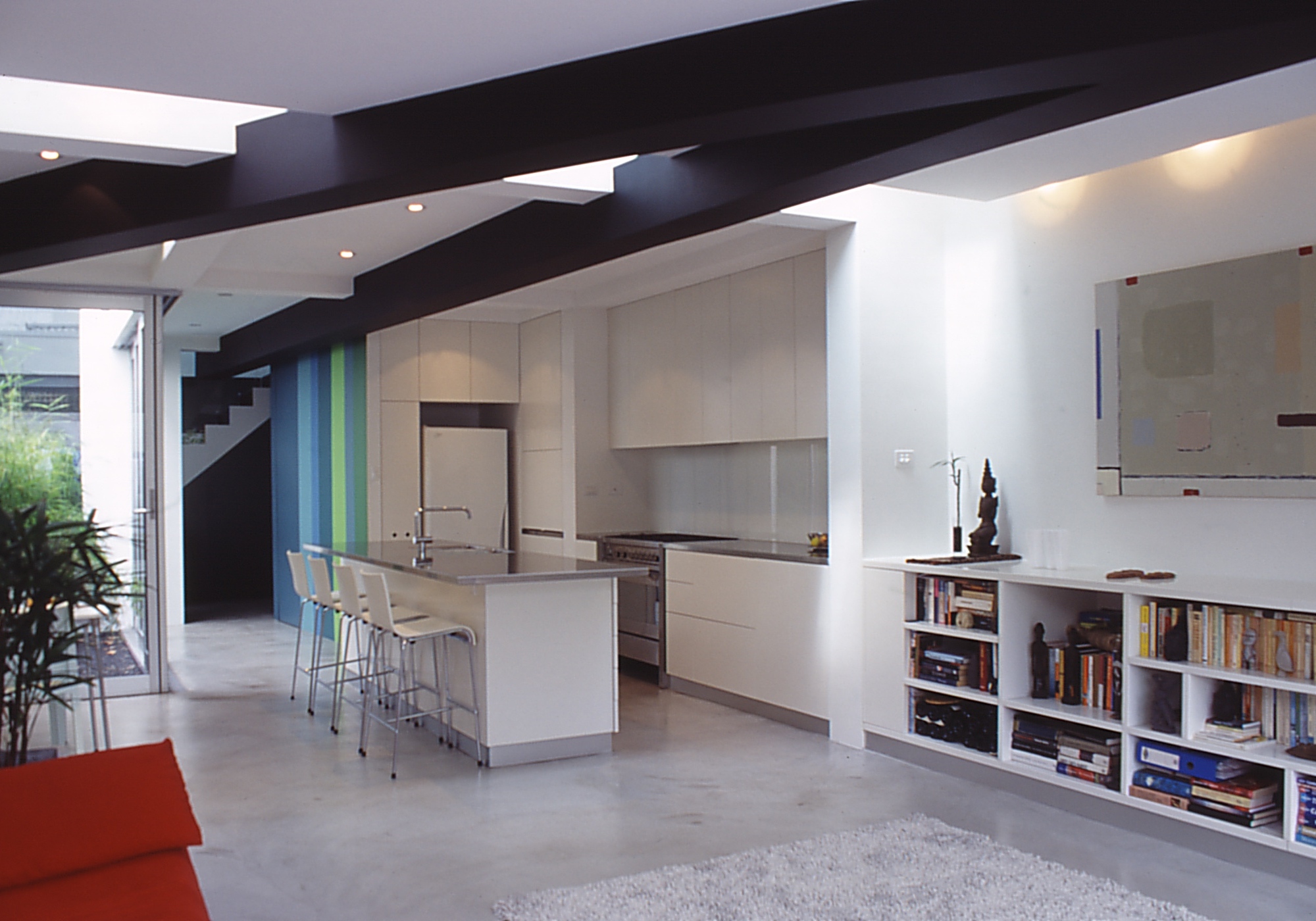 This project explores a spatial, sculptural and artistic approach within a compact residence.

The existing façade has been completely restored, but then behind the façade the design attempts to blast a new response through this traditional Paddington terrace house in Sydney. 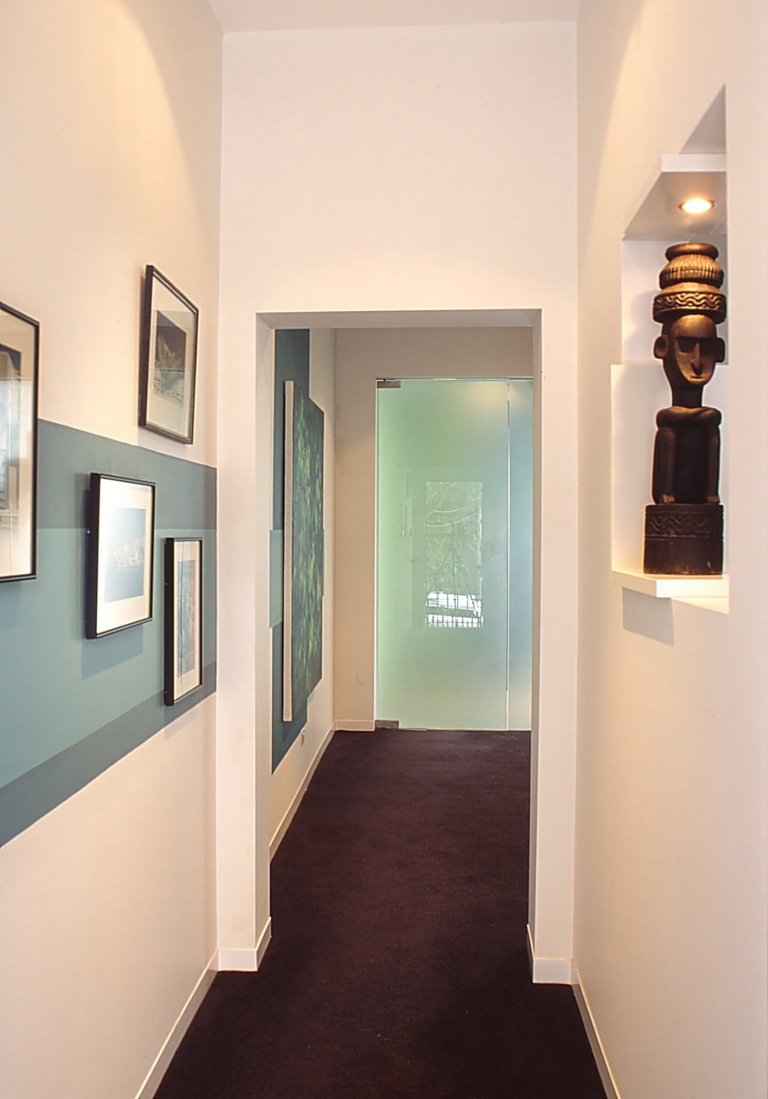 Along the entry hall there is a ‘memory wall’ – a composition of painted abstract forms, photographs by the owner and the painting ‘Relish’, by Marika Varady. 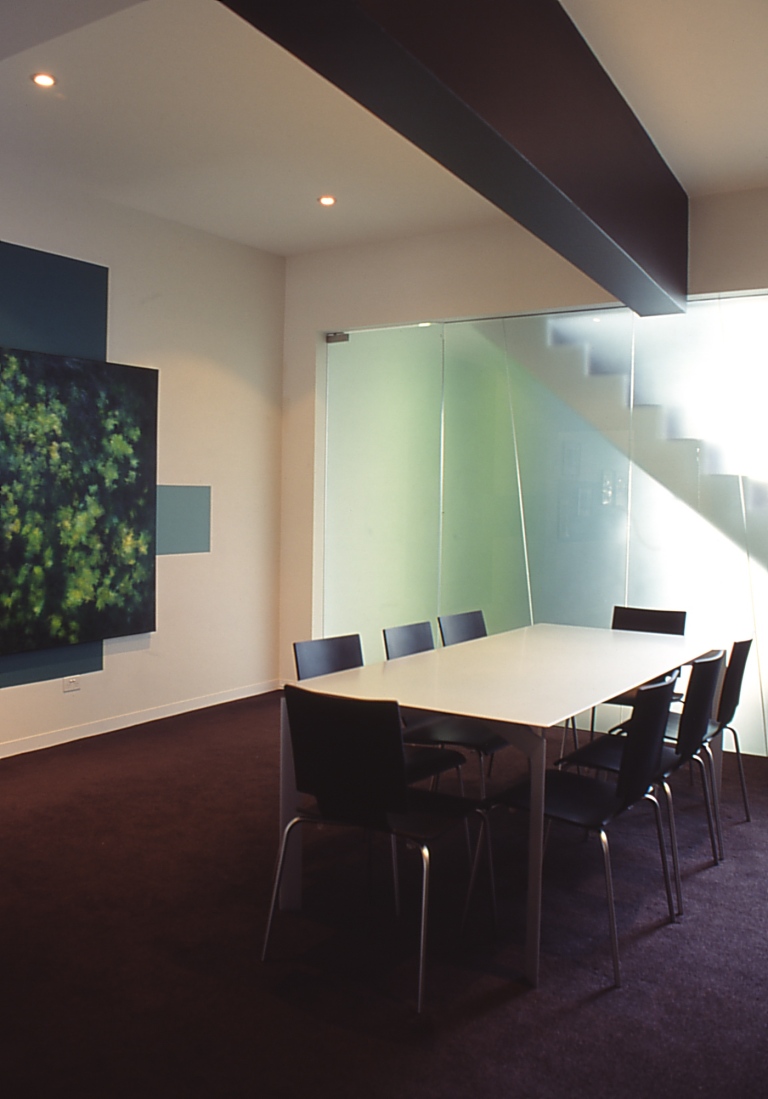 Designed and constructed at the turn of the millennium, the design takes inspiration from Stanley Kubrick’s film ‘2001: a space odyssey’ where a series of mysterious black monoliths arouse great curiosity.

In a similar way, mysterious black beams float through this house, drawing the observer’s attention from one source of light to the next; from the older terrace house to the new extension. The beams are both a sculptural element and symbolic signifier, raising questions about function and meaning, and they locate the occupant within this sculptural composition of spaces filled with magic, mystery + drama. 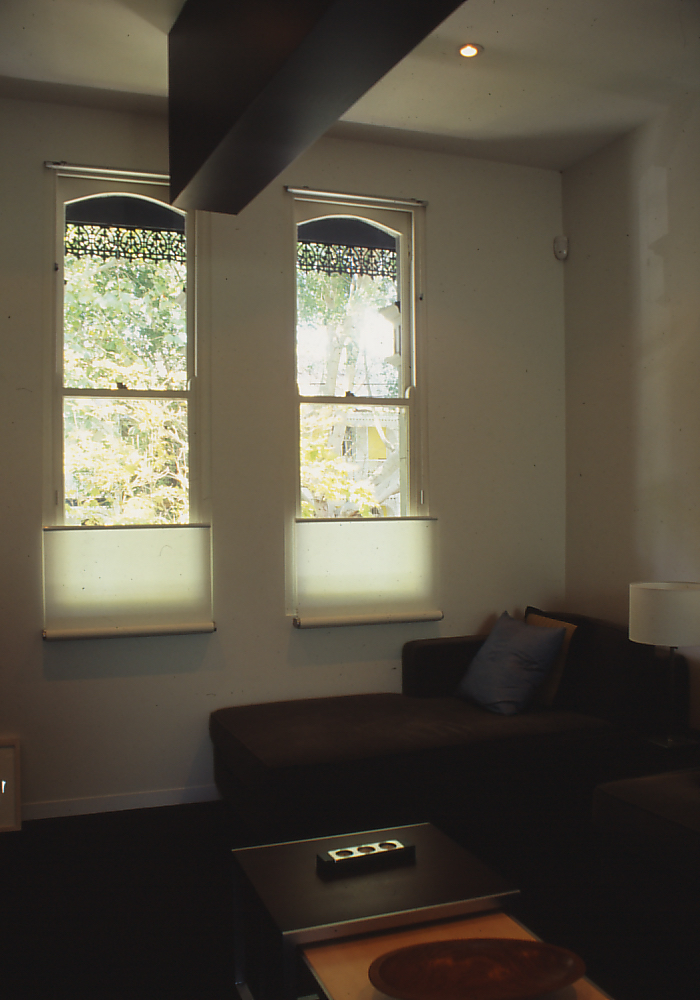 This design continues an ongoing investigation into the contemporary inner-urban dwelling, with particular attention to the intelligent re-interpretation and adaptive re-use of a housing type (the terrace house) that is ill-suited to Sydney’s climatic conditions or to a 21st century contemporary lifestyle.

The colours from the entry wall continue through to the suprematist composition in the stairwell, which camouflages the wall and door to the laundry and guest WC.

The formal spaces of the house remain darker and more enclosed at the front, with the less formal spaces opening up at the rear. Within the constraints of the traditional terrace house block the design draws much-needed new natural light and ventilation into these previously cramped spaces, without compromising privacy to and from the neighbours.

The less formal living area at the rear incorporates an eat-in kitchen bench that allows guests to engage directly with their host before, during and after their meal is prepared.

On a constrained site, the south-facing rear of the house has been cut through overhead with a clear glass light-shaft to draw light and sunshine inside. 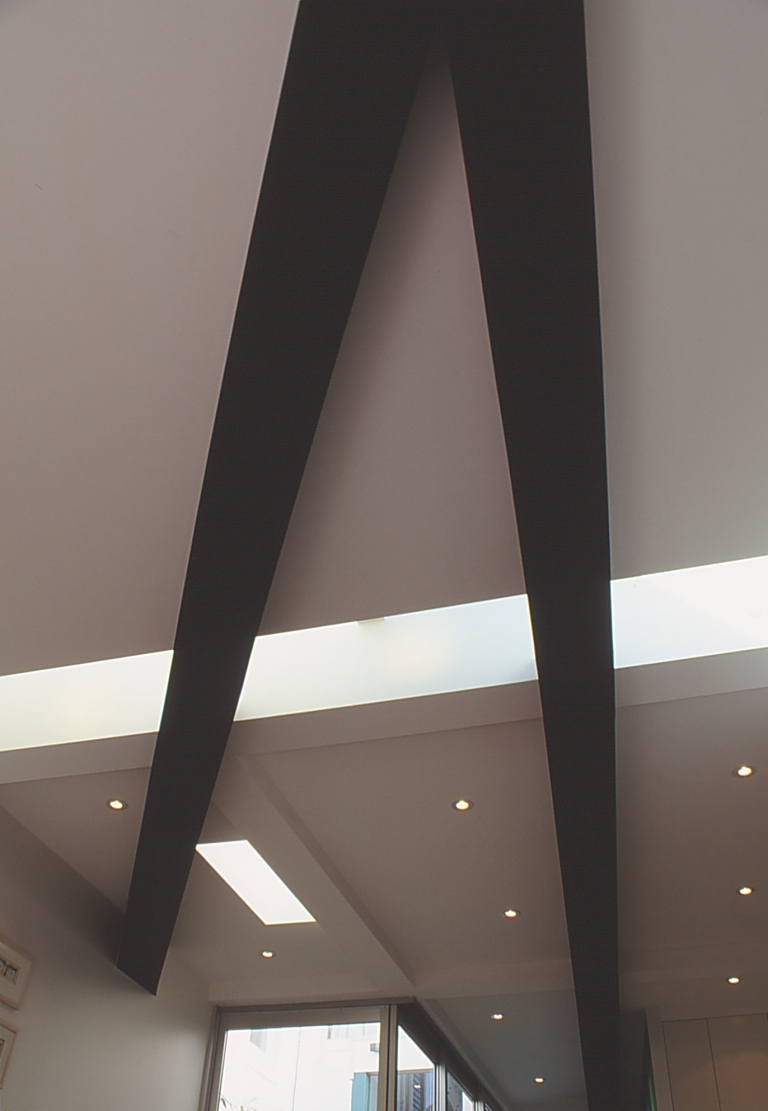 The extension then opens to a sun-filled courtyard that showcases a collection of Asian statues and incorporates a glazed fish pond. 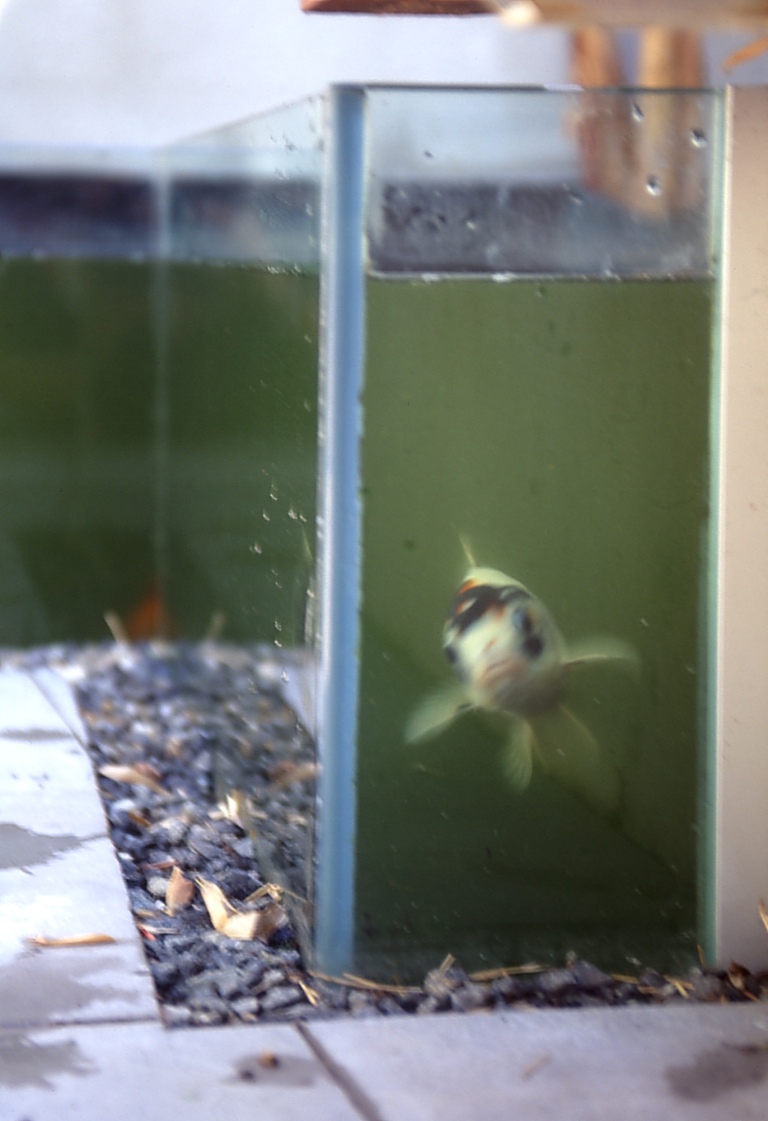 A smaller courtyard has also been created between the kitchen and stair, again drawing natural light into these spaces. 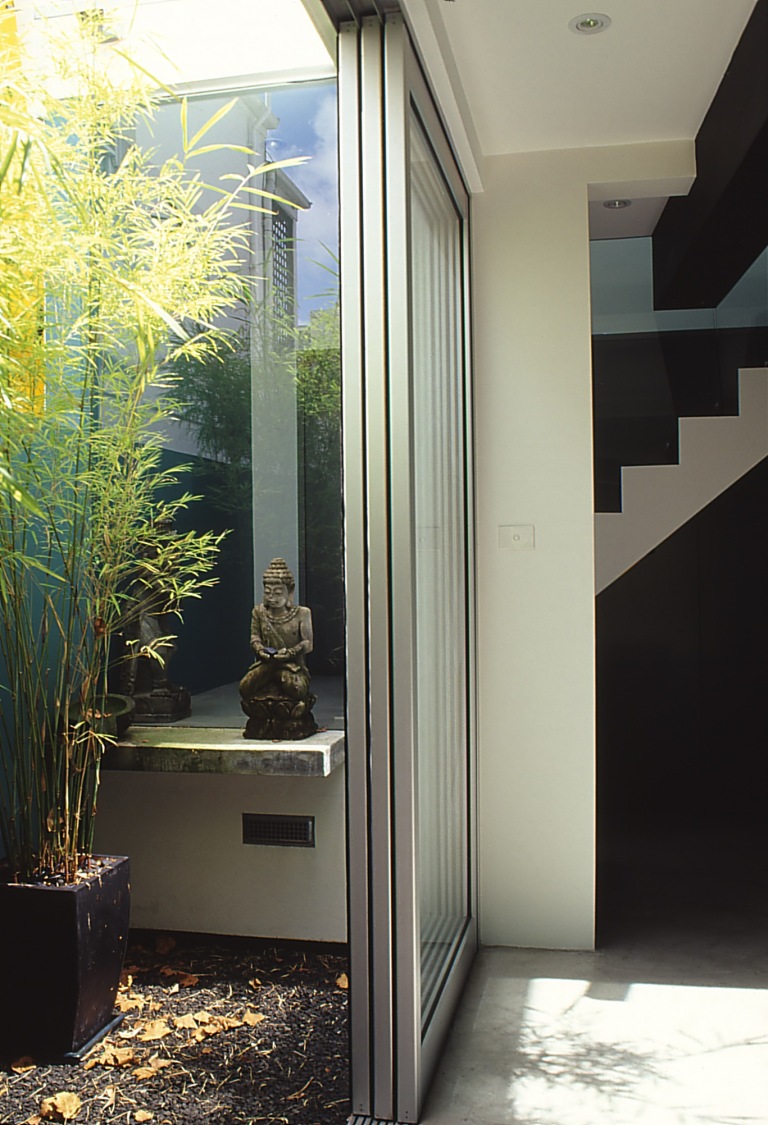 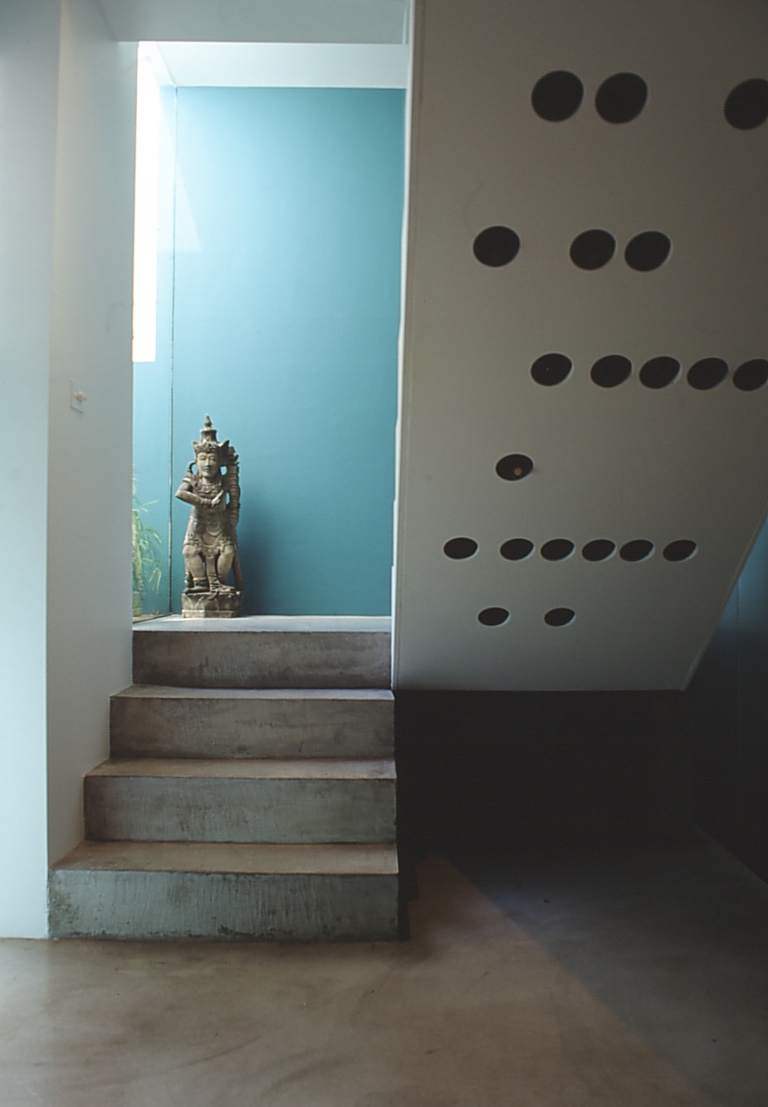 A clever re-orientation of the stair gains another metre upstairs, allowing a new en-suite bathroom to be inserted within the existing first floor envelope. 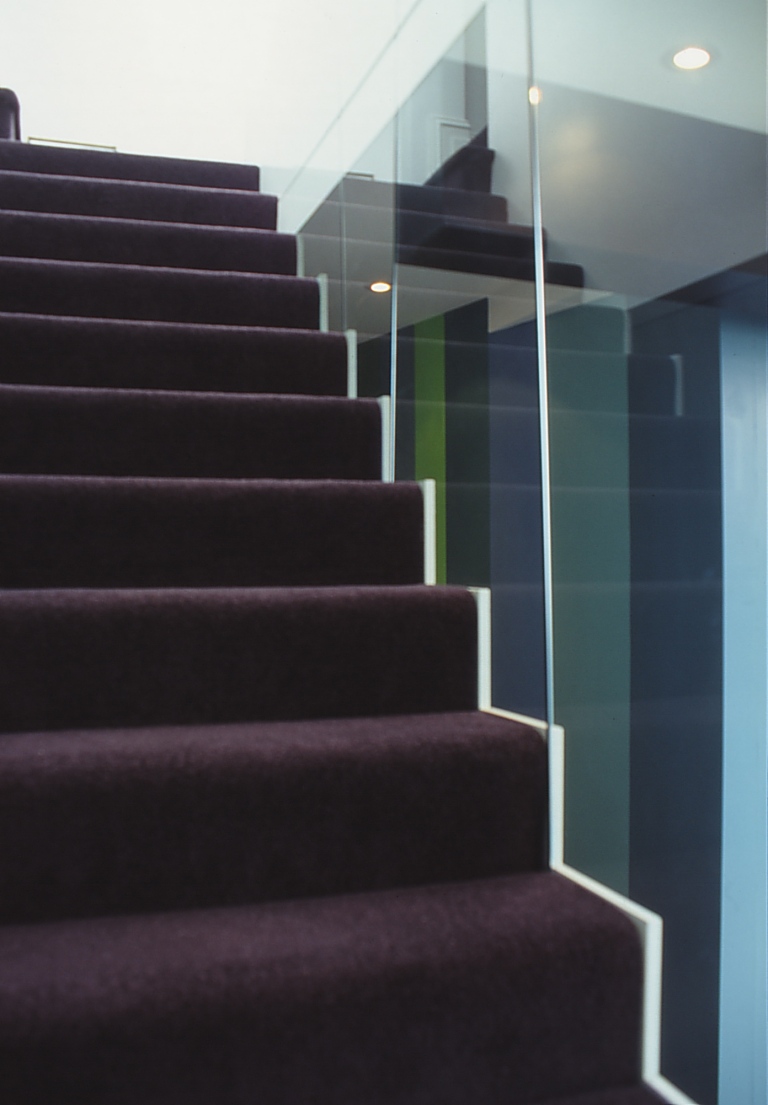 A well positioned venting skylight draws light downstairs through the stairwell, but also allows light into the adjacent bathroom through its sandblasted glass wall. 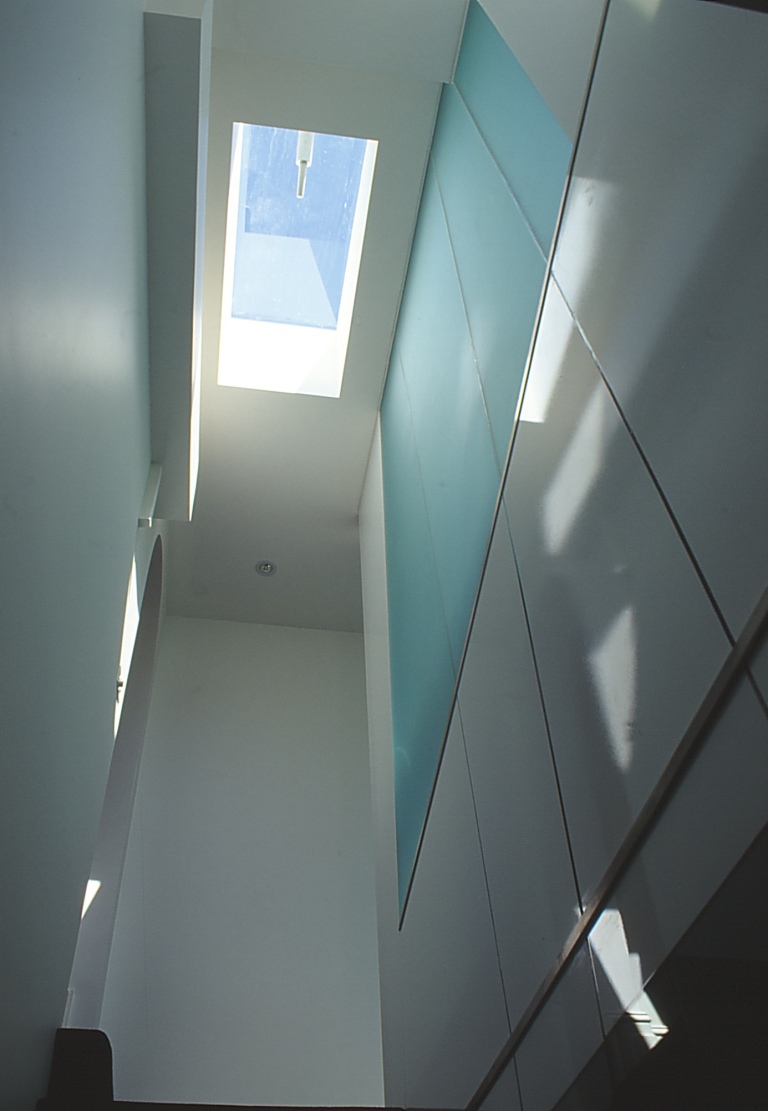 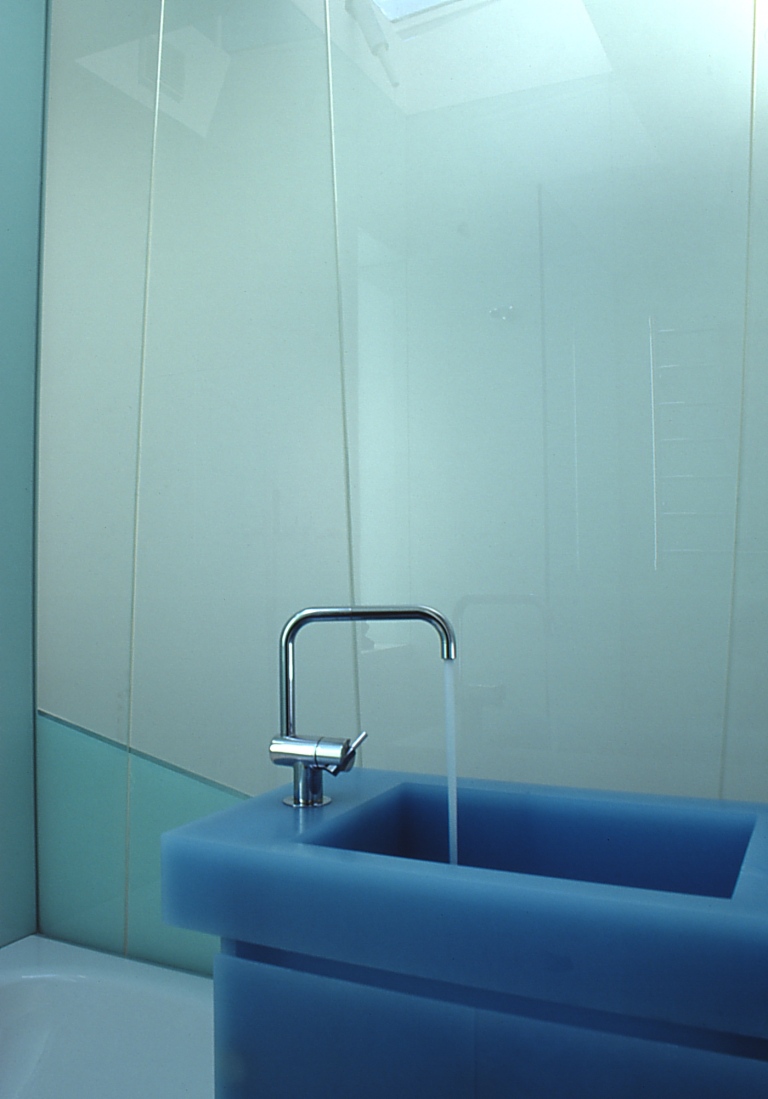 Marblo has been used to create the custom-made vanity bench where the Vola tap can be used at the built-in sink or swivelled to fill the bathtub.

The new bedroom balcony with its glass floor acts as a skylight for the rooms below, and a cleverly composed wardrobe squeezes the small gap between wall and window. 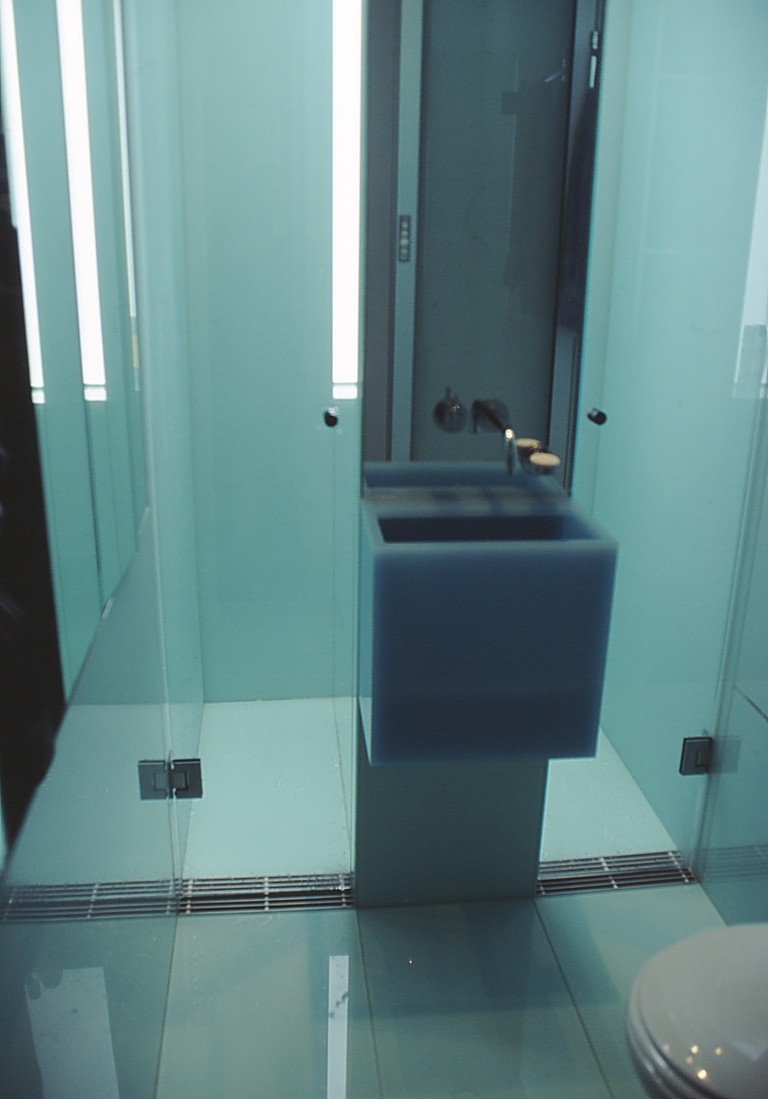 The bathroom and en-suite walls and floor are clad in Colourback glass, providing a durable, easy maintenance surface. The compact en-suite plan places a 400mm wall between a pair of 400mm doors, maximising efficiency and creating a reasonably generous 1.2m wide shower. Marblo is used again to create the custom-made basin. 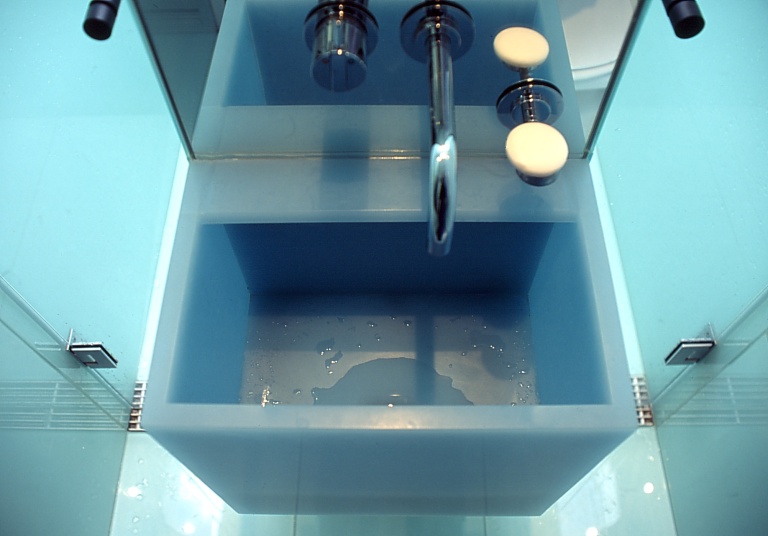 The window is fixed and translucent for privacy and security, however there is an opening skylight to allow for ventilation.

The final design has created a series of magical, dramatic spaces without sacrificing functional constraints, all achieved within tight council restrictions. 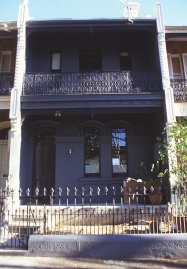 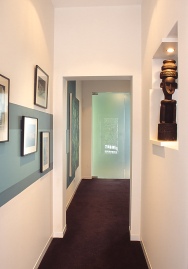 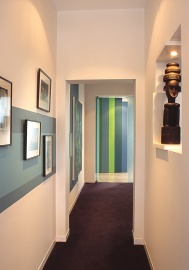 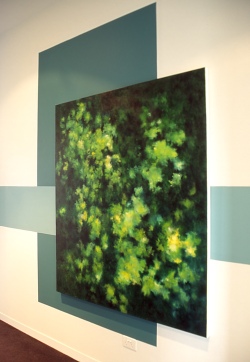 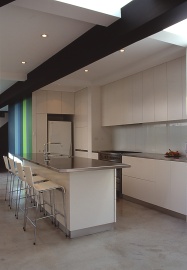 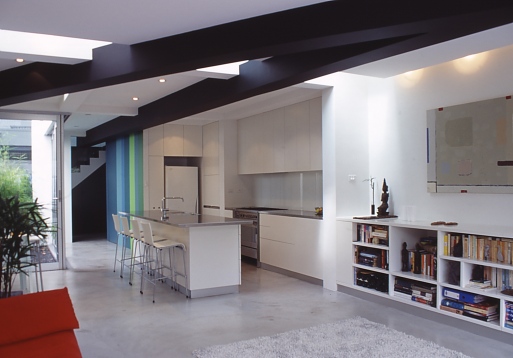 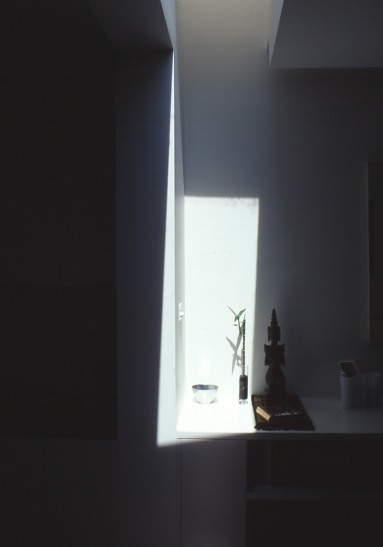 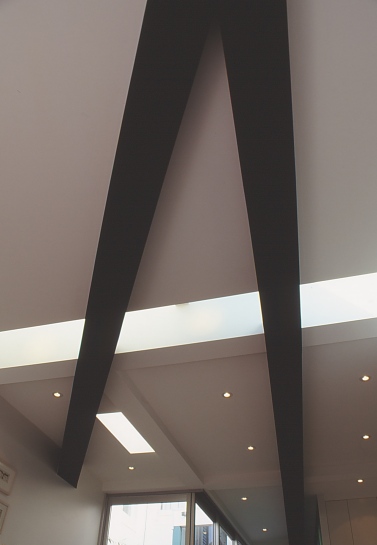 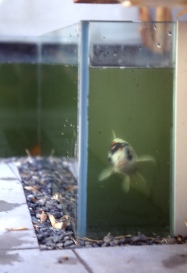 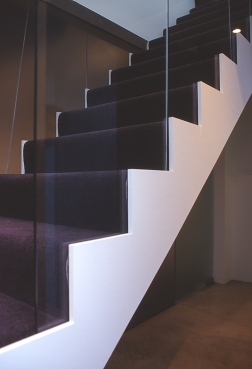 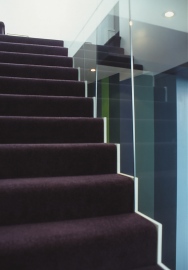 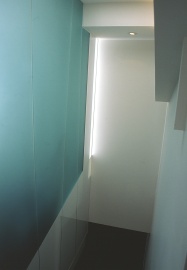 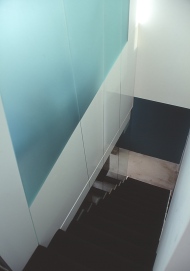 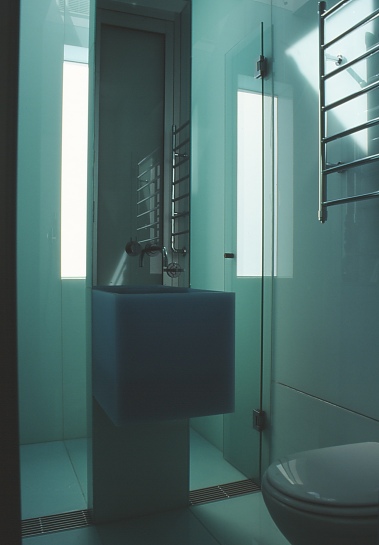 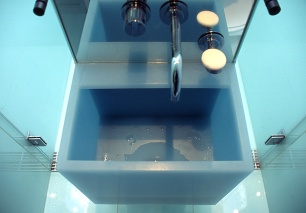 Go to the MENU (above right) to sign up to receive regular posts.

And you may also like to view the links below:

ALSO HAVE A LOOK AT STEPHENVARADY_ARCHITRAVELLER

ALSO HAVE A LOOK AT STEPHENVARADY_INTERIORTRAVELLER

ALSO HAVE A LOOK AT STEPHENVARADY_CREATIVITYBLOG